IMGT/GeneFrequency, created by LIGM (Université de Montpellier, CNRS) and on the Web since 2003 [2], was completely re-written and upgraded in 2016 [3].

IMGT/GeneFrequency is an IMGT® tool that provides a graphical and tabular representation, per immunoglobulin (IG) [4] or T cell receptor (TR) [5] locus, of the numbers of IMGT/LIGM-DB cDNA rearranged sequences assigned to the variable (V), diversity (D, joining (J) and constant (C) genes [6]. 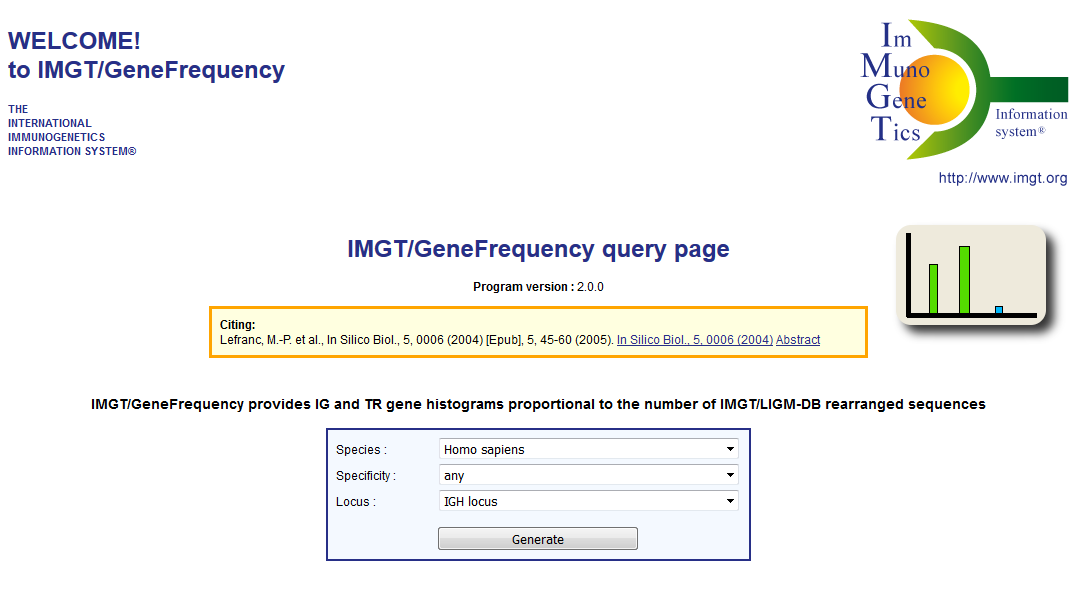 The IMGT/GeneFrequency query page allows the selection of the desired species, specificity and IG or TR locus to show on the graph. Selecting “any” in the specificity field will query all sequences regardless of their specificity.

On the top of the page, there is a form which permits to quickly change the selection. It works similarly to the form at the IMGT/GeneFrequency query page.
The section “Displaying” recalls the current selection.

The section “Sequence counts” gives the total number of unique sequences found for each gene group. One individual sequence (=one accession number) will be counted for each relevant group. However, a sequence will never be counted more than once for a given group. 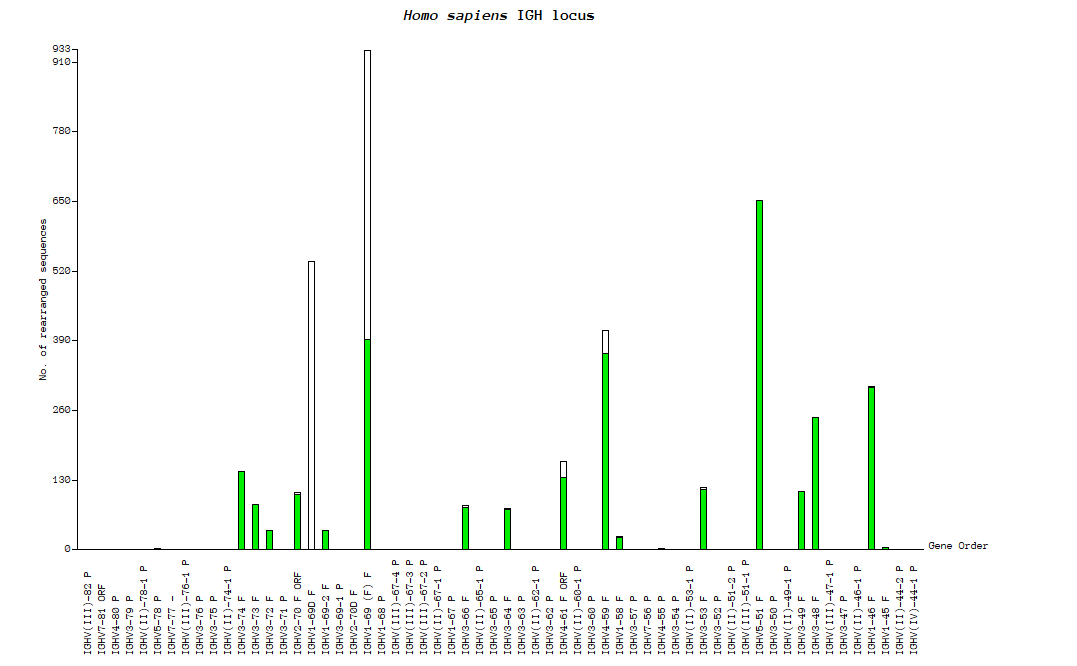 The graph is a bar chart that presents the number of IMGT/LIGM-DB cDNA rearranged sequences for each V, D or J gene of the selected IG or TR locus. The genes are placed at fixed intervals and ordered according to the Gene Order concept (defined in LOCALIZATION (IMGT Index). All genes are shown, even those which do not have any cDNA rearranged. sequences.

A bar of the graph is potentially divided in two parts:

The name of a gene is followed by the functionalities of its alleles (i.e, F, [F], (F)) as described in Functionality IMGT Index.

Hovering the mouse on a bar displays the number of cDNA rearranged sequences for that gene.

C-GENES are represented with a simple square instead of a bar. However, clicking on the box will open the IMGT/GENE-DB table of ‘annotated IMGT/LIGM-DB cDNA rearranged sequences’ for that gene, as above. 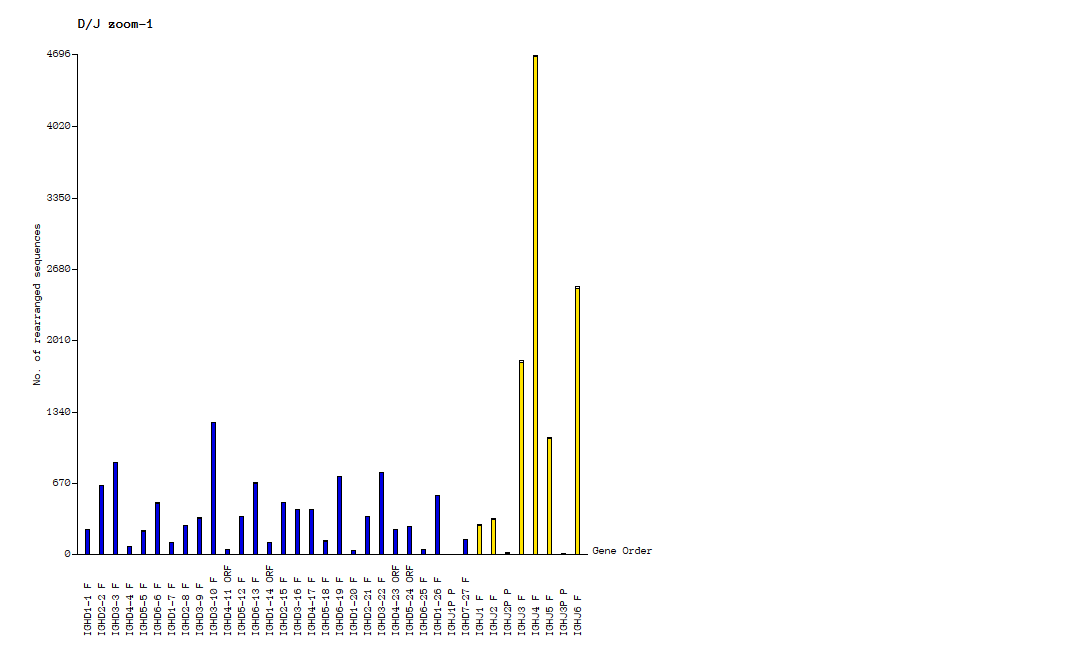 If the locus is more than 20 genes long, D-GENE and J-GENE will be extracted into separate graph(s) named D/J zooms. Note that zoom graphs may have a different vertical scale than the main graph. 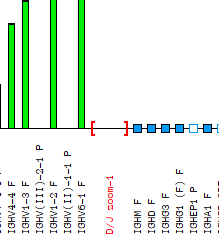 The position of these zooms on the main graph are represented by a red zoom indicator. Clicking on a zoom indicator will jump to the corresponding zoom graph.

Genes which belong to the locus, but which are not localized (gene order ‘0’), are placed in a separate graph below the zooms titled “Not localized genes”. These genes are sorted by alphabetical order.

To download a .png image of the graph currently being displayed, use the “Download this graph as a .png image” link at the bottom of the page. Generation of the file may take a few seconds.

The header is the same as the one on the graph page. 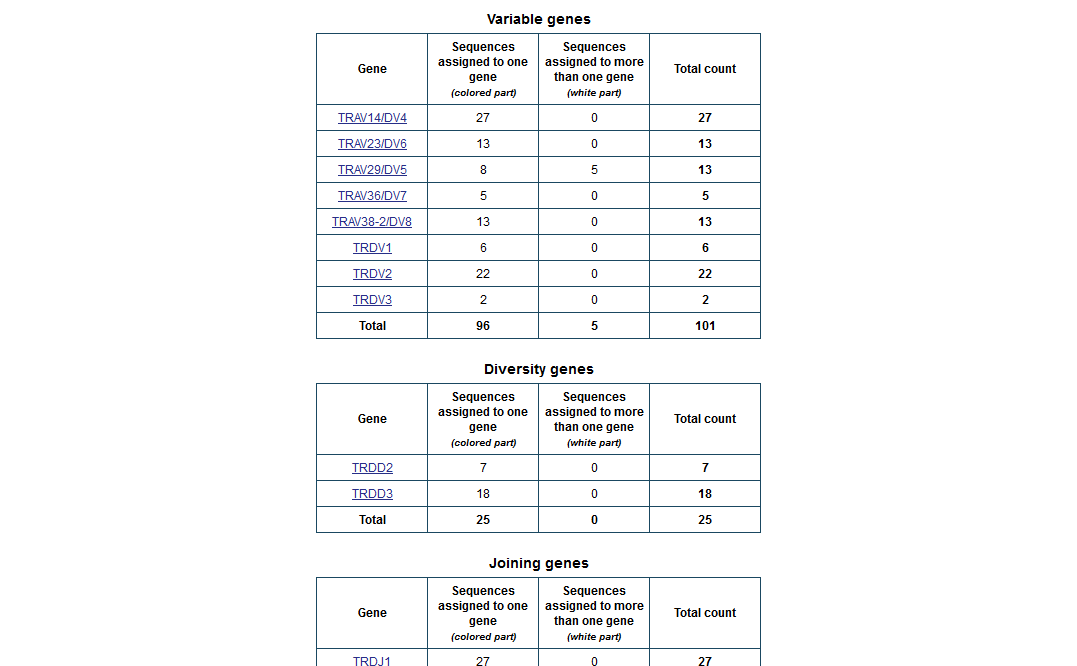 Each gene group is listed in a table, where the genes are sorted by name. In contrast to the graph, only the genes which have cDNA rearranged sequences associated with them are shown.

The tables have four columns:

At the bottom of each table, the sum of each column is calculated for practical purposes. However it should be remembered that the number of sequences of the white part is counted at least twice (as present on at least two bars on the graph). In contrast, the unique sequence counts are shown at the top of the page.

Clicking on a gene name will open the IMGT/GENE-DB ‘Table of annotated IMGT/LIGM-DB cDNA rearranged sequences’ (Accession number, Allele name, Sequence length, Sequence definitions, Specificity(ies) ) for that gene. From there, individual IMGT/LIGM-DB entries for each sequence can be accessed.

The current version 2 is a complete re-write in Java, by Valentin Klein (30/05/2016-26/08/16), of the original tool to achieve better interoperability and extensibility. It has been implemented and developed by Valentin Klein, Véronique Giudicelli, Sofia Kossida, Marie-Paule Lefranc and Patrice Duroux.
It is maintained by Patrice Duroux.

Improvement of IMGT/GeneFrequency Search page.
AJAX (Asynchronous JavaScript and XML) is used to create interactive web application. This AJAX technique makes IMGT/GeneFrequency smaller, faster and more user-friendly. With Ajax, the application can retrieve data from the server asynchronously in the background without interfering with the display and behavior of the existing page.